From the confines of the van, they watched as the embers spat, crackled and popped furiously.

‘Do you think they will ever find out?’

‘Except someone tells them and I expect you have no such plans,’ the veiled threat in Vladimir’s words barely concealed.

His pale blue eyes shone with satisfaction in the darkly lit van. The mission has been successful. All the evidence has either been eliminated or burnt to cinders.

‘Of course not,’ Helmut quickly replied. He pulled his cloak a bit tighter and took a long sip from a small bottle of Vodka,  the warmth of the fiery liquid unable to stop the frisson of chill he had within. He knew his days were numbered.

Written in response to the FFAW photo prompt above. Thank you, Enisa for the photo and PJ for hosting.

She was almost convinced that the Reverend’s sermon on giving up one’s sins was directed at her; a Church service had never left her literally feeling the heat of the brimstone.

Heaving a sigh of relief at the end of mass she rushed to the bus-stop and boarded the city bus back home, tussling in her mind whether to continue going to Church or to give it a break for a while.

As the bus wove its way through the city, the first message came in.

Beads of sweat popped out on her forehead, her heart accelerated and she developed an urgent need to use the toilet when she stared at the undeniable photo of her finagling money from the Church till.

Every hour that passed was a stab of fear; messages promptly came in from the unknown number at the turn of each hour. 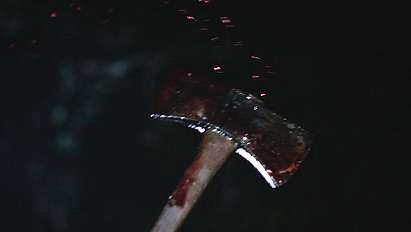 The hatchet was buried
where no one would find it,
or so they thought.

It was a nasty surprise
to see it leaning on the barn door
smeared in fresh blood.

Too many things didn’t seem right,
each day throwing up a new surprise,
they dug deeper to bury more secrets.

The hungry look they had in their eyes for each other didn’t go unnoticed. The passion between Sir Edgar and Lucy Rushmore sizzled.
Everyone knew that they were sweet on each other and it was no surprise how Lucy stole unchaperoned opportunities to stay as close to Edgar as possible. As a matter of fact, there were whispers that an announcement of their engagement would be made that evening.

It was a perfect evening. The drawing room was filled with high society. The ladies looked divine in their evening gowns and the gentlemen, dapper in their bespoke tailored suits.

The shocking news left everyone chilled to their bones. In the interlude of songs, dance, and laughter, Lucy was found in a dark powder room cold from death and two long pointed hairpins with the etchings of a black rose stuck in the base of her throat.

In response to the FFAW photo prompt above. Thank Louise for the photo and lady PJ for this writing challenge platform.

Out of habit, Miranda, glanced at the vacant house as she walked past.

She was always willing to tell the story of the house and it’s former inhabitants to anyone, of course without missing her highlighted moments of local fame as a witness to a highly publicized grizzly incident.

This is where she grew up and lived all her life. She knew the late Jones’s. Houses in the neighbourhood were close to each other, that everyone knew the other’s business and each wall had an ear listening to it.

She remembered that night when she overheard Jack’s gruff voice as he shouted ‘over my dead body Sue!’

It was nothing new to hear him make such declarations. The Simpsons loved hard, played hard and fought even harder. Their strange shenanigans were noisy enough to give the neighbours a clue.

Tilley, the beautiful Mrs. Jones went missing, her body parts found in different parts of town. The strange thing was that Jack was found with a slit throat and missing ears. The murderer is still at large.

Thank you, to Priceless Joy for hosting this charming platform where we unleash our stories and Yinglan for providing an innocent photo that brought out my dark side 😉

Silently, he listened to her hum happily, watching as she busied herself in front of the mirror, getting ready to go to work.

He knew she hadn’t heard of Elaine’s death and wondered what her reaction would be?

He had no words to express how sorry he felt that it had come to this, it had only started out as fun and he knew that the next couple of days may possibly change their lives forever.

He doubted that their marriage of twelve years would survive it. He would probably end up in prison if any evidence leads back to him.

The entire suspense made him sick to the pit of his stomach, he wasn’t sure again that he hadn’t left incriminating tell-tale marks.

The words Jen read startled her. The spidery handwriting indicated that the writer had struggled while writing.

“If you are reading this letter, thank you for finding me. It means that my time here is over and I am sorry that you are unfortunately saddled with the responsibility of laying me to rest. The money inside the envelope is some money set aside for my cremation. I don’t want to be buried in a box for I have lived buried for far too long inside one and would like my ashes to be scattered across the Seas so that it can float free. I loved the sea as a young girl.”

She wasn’t sure if she should simply put the letter back as she found it – back in the envelope marked ‘URGENT PLEASE READ’ and propped on the empty vase on the dust covered table. She could go away with the pie she had brought along and no one would know that she had visited, but her curious interest had been thoroughly aroused.

Everything about the little house down the cul-de-sac was intriguing. A pair of nondescript eyes in glasses always stared out of the window when she took her brisk jog in the evenings, until a week ago when she stopped seeing or feeling the eyes; the bold numbers on the intricately designed door were unusual since no other house in the area had such numbers and none of the neighbours she interacted with since her move to the neighbourhood knew anything about the person living behind the door.

Decision and justification made, she baked and went visiting. She reasoned that it was the neighbourly thing to do. To fraternize with those living close to you a little bit, especially if you are going to be living there permanently.

Her gentle rap on the door found it slightly ajar and she stepped in cautiously, repeatedly saying hello, to no response.

Jen’s eyes quickly took in the sparse furnishing, an implacable, unpleasant odour hitting her nostrils and sending alarm bells to her senses that something wasn’t right and to get away fast, but her piqued mind sent her walking down the short passage which led to the rooms.

The design of the bungalow was familiar since it’s shaped like hers but both houses were sharply different. Where her’s wore a cheerful, homey and inviting look, the atmosphere of this one was forlorn and tired. The drapes were worn with age, the wallpaper lifting at the corners, the dirty rug gave off a musty smell that mingled with the other smell that only grew stronger with each step.

A body laid on the bed in the second room as though in deep, peaceful sleep but the pungent smell of death belied it’s appearance. Rushing out of the house into the street for fresh air, Jen dialed the police.

Providing all the information that she could muster when they arrived, she watched with saddened interest as the men from EMS respectfully wrapped the frail body of an old lady in a body bag. Spying the numbers that was crudely branded on the inner part of her left arm which was so thin that her skin was almost translucent, Jen recognized that the numbers on the arm matched the numbers on the door.

What did it they represent? Who is the lady? What was her story? These questions raced through her thoughts and she wished she had followed her prying mind to seek the eye’s in the window earlier.

The story behind the door. Discover challenge

Do step in and show some love.

Serenade: a fast-paced short fiction that might thrill and intrigue seekers of quick literal write.

Get lost: sometimes getting lost is actually the best way to find where you are going or to find yourself. A thought-provoking and inspiring read.

His wife’s cool hands on his shoulders halted Sanders from further destruction as he took another swing at the sculpture with his club.

He couldn’t count the number of times the sculpture taunted him, taking on fiendish proportions in a nightmare until he smashed it to pieces and then made a new one from scratch, once again resembling his tomboyish, young sister with her sweet looking face.

No matter what everyone said, no matter that his mother never openly expressed her blame, he held himself responsible.

What if he always wondered?

What if he had accompanied her to the cinema that fateful night many years ago as their mother had suggested?

Would she be alive now? Would that have deterred the monster who kidnapped her, that by the time her body was found, she was desecrated in ways beyond words?

Sanders was perpetually haunted by these thoughts and it was worse that the monster was still out there.

Thank you, Phylor,  for the photo and Priceless Joy for hosting this charming platform where we unleash our stories

She is amazing at describing love and life in her poems. She creates such beautiful images with her words. Truly, she is a talented writer and I’m so excited to have her poetry book and to continue reading through it.

It was an ugly Winter night!

Anna couldn’t believe the sheer horror of what he planned.

The winds howled and it stormed all night long, that to escape was not an easy feat.

Yet, she decided to flee into the wild night and take her chances, but she fell halfway.

In a slow motion, it all shattered as he descended on her.